Donkeys love to play. When Ichabod (the Mammoth Donkey) was growing up, he had other youngsters to play with. He arrived here and expected Burrito to play with him, but Burrito was not interested… at least not at first. 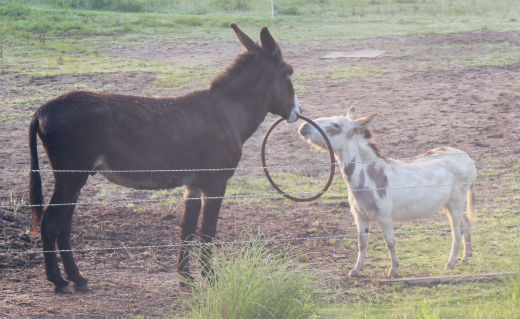 Ichabod continued to invite Burrito to play and eventually he gave in. Burrito still never initiates the play, but if Ichabod walks up to him with a toy, and nugs at him a bit, he will usually start to play. 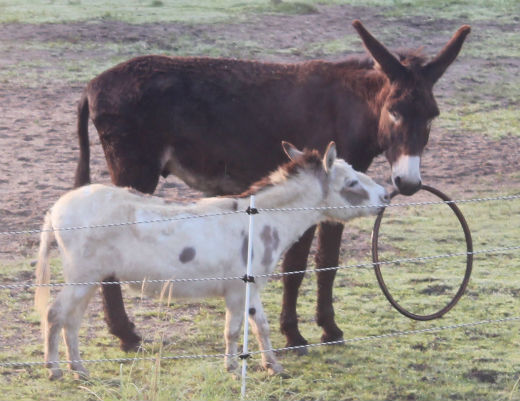 Their favorite game is tug-of-war. The favorite toy is a rubber food bowl, but they also enjoy large sticks and an old bicycle tire.

Aside from tug-of-war, they also enjoy racing. Burrito corners really well, but Ichabod has the long legs, so they can really run quite vigorous races. Sometime they use Mallory (my horse) as a turning post and end up running circles around her. She completely ignores that and all other donkey games. 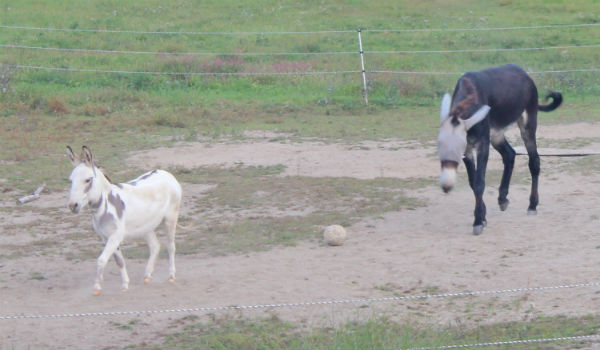 They also enjoy wrestling! Burrito has found some great strategies for completing against his giant friend. Sometimes he stands on the high side of the sloped paddock to gain a height advantage.

Donkey games are a highlight in my day. I can see them playing from my office window and my dining room window. My whole family enjoys tug-of-war contests while we eat dinner!

I am a fiber artist. I create my own fabric designs and finished art quilts as well. View more posts